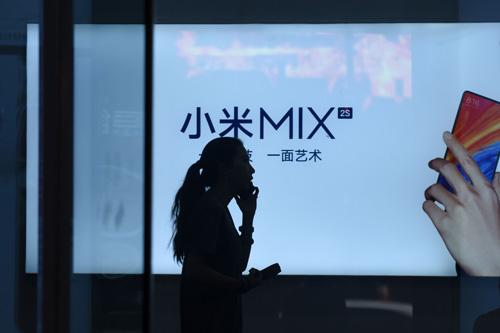 Chinese smartphone maker Xiaomi’s shares tumbled in Hong Kong on Monday, reversing four consecutive days of advances, as the company finds itself caught in the middle of a turf battle between the city’s bourse with mainland equity exchanges as Asia’s hub for technology companies to raise funds.

The Shanghai and Shenzhen exchanges caught investors and exchange officials off guard at the weekend when they said they would not allow mainland investors to buy shares in Hong Kong-listed foreign firms, companies with different voting right structures or so-called “stapled” securities.

Hong Kong’s exchange described as “temporary” a dispute with its Shanghai and Shenzhen counterparts over plans to bar investor access to dual-class shares, a move that led to smartphone maker Xiaomi Corp tumbling as much as 10 percent on Monday.

China’s Xiaomi, which made a weak debut last week, was the first company to list in Hong Kong with weighted voting rights (WVR) in a $4.7 billion deal following a historic rule change in the city to allow dual-class share structures.

Investors had however hoped that Xiaomi’s inclusion later this month into the Hang Seng Composite index – which forms the basis for shares included in the stock connect – would help attract a flow of capital from the Chinese mainland.

The Shanghai and Shenzhen exchanges announced on Saturday they would block mainland access after consulting domestic brokerages and that most investors expressed a lack of understanding of the new types of securities.

Chief executive of Hong Kong Exchanges & Clearing, Charles Li, said on Monday he would discuss the move with Chinese regulators and his bourse counterparts as part of a trip to the mainland planned for this week.

“When you look at the two announcements, it is not about whether to include, it’s about when to include – it’s about temporarily giving people a chance to look at it, to study how it will work, but the direction of the inclusion is not changing.”

He said that any small difference between the exchanges was not going to change the role of Hong Kong as a connector between international markets and China.

The ban is still considered a blow to Hong Kong, which has been working to improve its ability to attract Chinese tech companies to list in the city.

Next to U.S. technology companies, Chinese tech firms are considered by bankers to offer the world’s biggest pool of potential listings, with companies worth some $500 billion expected to seek listings in the next couple of years.

To that end, HKEX introduced rules in April allowing companies to list with WVR – a key attraction of a U.S. listing – as well as allowing U.S.-listed Chinese companies to hold a secondary listing in Hong Kong for the first time.

Steven Leung, sales director at UOB Kay Hian, a broker, said investor belief that Xiaomi would be included in stock connect had helped boost its share price towards the end of last week.

“(The decision to exclude it) will affect IPOs, and they may not consider WVR if they want to be included in stock connect to tap the mainland investors,” he added.

Earlier this year, Chinese authorities announced plans to allow Chinese depositary receipts (CDRs) as a means of letting overseas-listed companies sell shares at home – a plan that directly undercut Hong Kong’s efforts to attract the likes of Alibaba and Baidu, who are both U.S.-listed.

While details of CDRs are being worked out – earlier this month Xiaomi postponed plans to sell CDRs – mainland companies are still pushing ahead with Hong Kong listings, including Meituan-Dianping, the online food delivery-to-ticketing services platform, which could raise $4 billion in the city.

But other observers attributed the Shanghai and Shenzhen decision to cultural differences between the two markets.