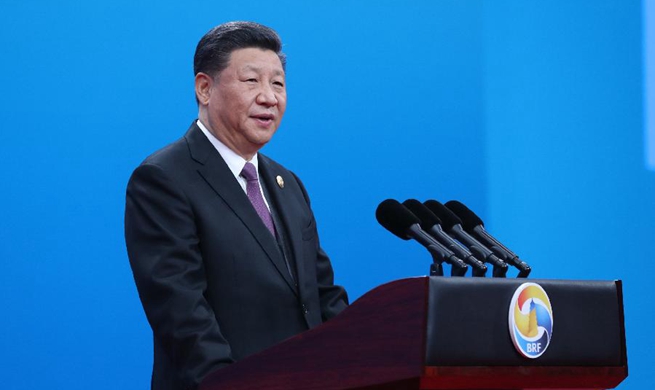 Chinese President Xi Jinping said that China will take opening-up to a higher level and increase imports of goods and services on a larger scale.

Speaking in a keynote speech at the opening ceremony of the second Belt and Road Forum for International Cooperation on Friday in Beijing, Xi said China will further lower its tariff rates and welcome quality products from around the world, adding that the country is willing to import more competitive farm produces, finished products and services.

China will allow foreign investors to operate businesses in more sectors with controlling or full stake and will roll out a new batch of pilot free trade zones, said Xi, who also pledged  that China will step up protecting legitimate rights and interests of foreign owners of intellectual property rights, prohibit forced transfer of technology and create a business environment in which the value of knowledge is respected.

Xi basically used the speech to address all the concerns the US has raised in trade talks.

On the yuan, the president said China won’t pursue currency depreciation harming other countries and will constantly improve the yuan exchange rate mechanism and let markets play a decisive role in resource allocation.  “China will keep the yuan basically stable at an equilibrium level to promote stability of the global economy.”

Regarding the Belt and Road initiative, Xi pledged to clean up the Belt and Road infrastructure program amid criticism the policy is indebting poorer nations and making them dependent on Beijing. He vowed `zero tolerance’ of corruption in BRI projects, calling for adoption of `international acceptable’ standards in public bidding and tendering process.

He called for the use of special loans, silk road funds and financing from multilateral agencies to support BRI projects — railways, roads and pipelines to ease infrastructure bottlenecks that have constrained development in some countries. He also said China will further shorten the so-called negative list to spur foreign investment. He also vowed to strictly implement China’s foreign investment law.

NDRC moves bolster expectation for capital require... China's state planner is conducting surveys and research recently and soliciting market opinions on ways to improve the rules on capital requirement i...
China’s local government bond sales soared i... China's local government bond sales in June hit the highest so far this year and the regulators significantly accelerated approval of fixed-asset inve...
Infrastructure binge and environment protection pu... Surging cement prices in China, with a new round of price hikes announced lately, have made cement producers more profitable than property developers ...
Cash is the king again—China’s real es... China Vanke, one of the biggest property developer in the country, made a headline over the weekend after it put "survival” as the keyword for its aut...
CLSA: Hong Kong home price expected to decline 15%... The investment bank CLSA expects home prices in Hong Kong to decline 15 per cent within a year as the price level is becoming increasingly unaffordabl...