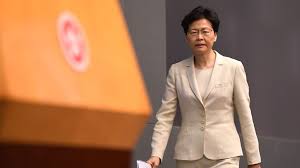 The withdrawal of the bill is one of the major demands of pro-democracy protesters who have demonstrated against the government for almost three months. Lam has called a 4 p.m. meeting with pro-establishment politicians, the SCMP said.

Her move comes after a weekend that saw some of the fiercest clashes between protesters and riot police. Demonstrators have lobbed petrol bombs and set bonfires in the streets, while police officers fired tear gas, rubber bullets and pepper spray, making more than 1,100 arrests since early June.

Hong Kong stocks soared, led by real estate developers, with the benchmark Hang Seng Index surging as much as 3.9 per cent.

The turmoil that followed Lam’s attempt to introduce the ill-fated bill — including mass marches that drew over 1 million people and protests that shut the city’s busy airport — have turned into the biggest crisis for Beijing’s rule over the former British colony since it returned to Chinese rule in 1997.

Trump said US to end special treatment for Hong Ko... President Donald Trump on Friday ordered his administration to begin the process of eliminating special US treatment for Hong Kong as part of punishm...
China threatens to retaliate after Trump signed bi... China warned the United States on Thursday that it would take “firm counter measures” after President Donald Trump signed legislation expressing US s...
Hong Kong set to see largest drop in exports since... Hong Kong’s exports are set to suffer the steepest drop in a decade due to the prolonged trade war between China and the United States. The cit...
China sends stronger warning, bars Cathay Pacific ... China’s civil aviation administration has suspended staff at Cathay Pacific Airways Ltd. who took part in the protests from duty on flights to the mai...
Cathay Pacific CEO quits in shock move amid Hong K... Cathay Pacific CEO Rupert Hogg has resigned in a shock move on Friday, amid a series of controversies over the involvement of its employees ...

Comments are closed, but <a href="https://www.yuantalks.com/hong-kong-chief-executive-carrie-lam-to-withdraw-extradition-bill-scmp/trackback/" title="Trackback URL for this post">trackbacks</a> and pingbacks are open.