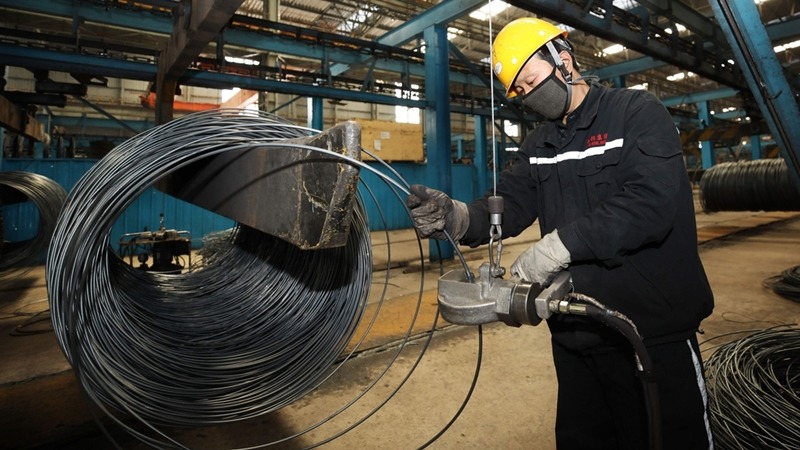 Profits at China’s industrial companies grew for the eighth straight month in December, suggesting a sustained recovery as the manufacturing sector rapidly emerged from its coronavirus slump.

Profits surged 20.1 per cent year on year in December to 707.11 billion yuan ($109.3 billion), accelerating from the 15.5 per cent growth in November, National Bureau of Statistics (NBS) data showed on Wednesday.

For the full year of 2020, total profits generated by China’s industrial companies grew 4.1 per cent year from the year before to 6.45 trillion yuan ($1 billion), recovering from a 3.3 per cent decline in 2019. It was also quicker than a 2.4 per cent gain for the first 11 months of the year.

After China brought the domestic COVID-19 outbreak largely under control, production activities have gradually recovered. Industrial profits returned to growth in the second quarter, up 4.8 per cent from a year earlier and the growth pace quickened to 15.9 per cent in the third quarter.

The profit gains last year were notably driven by the manufacturing sector, which saw margins increase by 7.6 per cent, said Zhu Hong, a statistician at the statistics bureau. The steady recovery of production and sales at industrial companies have provided solid support for the growth of profits, said Zhu.

Earnings at China’s state-owned industrial firms were down 2.9 per cent for 2020 year on year, compared with a 4.9 per cent decline from January-November and a 12 per cent slump in 2019, the data showed. Profits at private companies increased 3.1 per cent, picking up by 1.3 percentage points from the January – November period.

The industrial-profit data covers large firms with annual revenue of more than 20 million yuan from their main operations.

Industrial companies’ costs per 100 yuan revenue declined to 83.89 yuan, down 0.19 yuan from the January-November period of the year and down 0.11 yuan from the level seen in 2019, showed the data.

Liabilities at industrial firms rose 6.1 per cent year on year at the end of December, compared to 6.8 per cent growth as of the end of November and a 5.4 per cent uptick as of end-2019.

China is the only major economy in the world to avoid a contraction in 2020, with gross domestic product up 2.3 per cent for the full year, while many countries remain crippled by the pandemic.

Economists polled by Reuters expect China’s GDP to rise 8.4 per cent in 2021, the fastest pace in a decade. However, some analysts cautioned that a slower recovery in consumption and a potential rapid slowdown in credit growth could be risks for the Asian powerhouse.

On Tuesday, Ministry of Industry and Information Technology spokesman Huang Libin played down concerns that sporadic coronavirus outbreaks over the last few weeks will have a significant impact on the industrial sector.

“Recently the outbreaks have resurged in many places, in particular, the situation in Hebei and northeast China is serious. This will have a certain impact on the industrial sector, but the impact is much smaller compared with the outbreak in Hubei early last year,” said Libin, who is also director general of the Performance Inspection and Coordination Bureau.

“The impact will be controlled to a certain extent, because we have had rich experience from combating the pandemic in Hubei. And now we are running targeted control, which will not result in a large-scale shutdown of production.