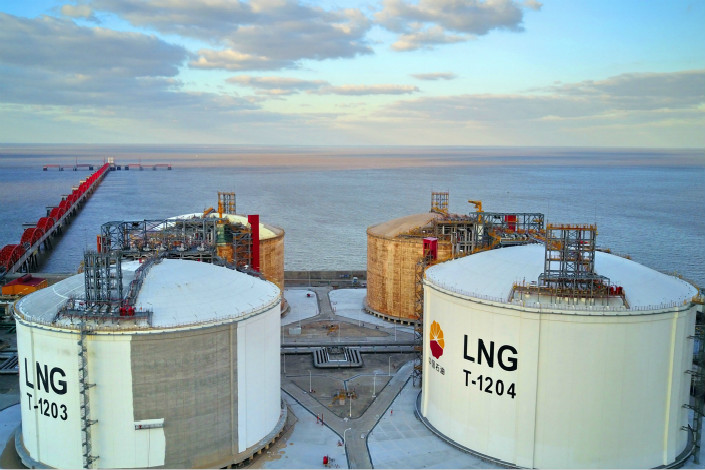 Price of liquefied natural gas (LNG) on China’s spot market hit a record low this week and analysts cut their gas demand forecasts, as the coronavirus outbreak depresses industrial, commercial and transportation appetite over the next few months.

The spot price of LNG fell to $2.76 per million British thermal units (mmBtu) Wednesday, a 62 per cent drop from a year earlier, according to commodity market information provider JLC.

The price plunged 30 per cent from late January when the epidemic started spreading beyond its epicenter in Wuhan.

China’s industrial or commercial gas demand has already fallen as a result of the extension of the Chinese New Year holidays in early February,” said Alicia Wee, analyst at consultancy FGE.

China’s LNG demand is now only expected to grow by 4 per cent year-on-year, compared with previous estimates of 13 per cent, analysts from Bernstein said.

The coronavirus outbreak will “significantly impact” the country’s LNG demand, curbing 49 cargoes – 3.3mt – destined for China until May, said analysts at Poten & Partners.

Most of the impact would be felt this month, with about 20 fewer cargoes than expected now due, according to an updated LNG market outlook released late on Thursday.

By the end of the first week of February, China’s gas demand fell by 2 billion cubic meters, mainly driven by the industrial sector, according to Mackenzie.

Sun Xuelian, natural gas industry analyst at JLC, said the LNG price usually rebounds after the Lunar New Year holidays, which often take place in February. But the coronavirus outbreak has led to extended holidays nationwide, dampening the price recovery. Businesses have started to resume operations this week, but many companies have decided to remain closed awhile longer to monitor the virus situation.

Weakening demand from China is also putting pressure on the global natural gas market. The US Energy Information Administration (EIA) warned Tuesday in a report that downward pressure on gas prices in the U.S. partly reflects warm weather.

EIA said it expects US spot gas prices to remain below $2.00 per mmBtu this month and next. In January, the Henry Hub natural gas spot price averaged $2.02 per mmBtu.

China’s steel makers’ activity contrac... Chinese steel makers' activity contracted in June as the government stepped up production curbs on mills to fight air pollution after most steelmaking...
China hog prices could hit a record high in Q4 due... China's agriculture ministry said the country's pig stock breed is declining at the fastest pace in a decade and hog prices are expected to hit a new ...
China likely to see steel oversupply in 2020, warn... China's steel output is expected to maintain robust growth this year and the domestic market will see reemergence of oversupply as growth in demand i...
Tin tumbles the most in seven years on slowdown co... Tin, a metal extensively used in manufacturing sector, plunged the most in more than seven years in London following a massive selloff in China’s onsh...
China will not increase annual import quotas for w... China will not increase its annual low-tariff import quotas for corn, wheat and rice to accommodate stepped-up purchases of agricultural goods from t...